The film The Ladykillers, released in December 1955, is one of the classic Ealing comedies and was one of the few British colour films of the period. The story, well-known to most, is that of a disparate gang of criminals assembled by and headed by Professor Marcus (played by Alec Guiness) who can’t seem to get rid of a little old lady with whom they are lodging as they plan their heist.

For our purposes, the film is of interest for the person of Harry Robinson (played by Peter Sellers in  his first weighty film role) with his Cockney diction and his garb that of a teddy boy, although, because he was a criminal was described as a spiv by the director of the film, Alexander Mackendrick. William Rose, the originator and screenwriter was American, but as he and Mackendrick fell out it was left to the latter to complete the work. And Mackendrick points out, what was not immediately obvious, which was that the film was an allegory of the sorry state post-war Britain: Mrs. Louisa Alexandra Wilberforce, the naïve little old lady, widow of a navy captain killed many years previously, was a “much diminished Britannia” representing an anachronism, the past glory of Edwardian and Victorian England. Likewise, her house, lopsided because its foundations had subsided due to German bombs and set aside fom the other houses in the street and surrounded by a grim landscape of railyards and screaming trains represented the teetering state of Britain post 1945. Each of the five criminals represented a different threat to Britain; according to Mackendrick, in his own words:

British society was shattered with the same kind of conflicts appearing in many other countries: an impoverished and disillusioned upper class, a brutalised working class, juvenile delinquency among the mods and rockers, an influx of foreign and potentially criminal elements, and a collapse of ‘intellectual’ leadership. All of these threatened the stability of the national character.

Forumers will have spotted that the director’s words, published in his book On Film-making (2005), contain a glaring ahistoric mistake: there were no mods or rockers in 1955, only teds. Despite this mistake, one would think Mackendrick had the generational disconnect in mind, but further in the same passage he specifies each player’s attributes (less the professor, the intellectual leader of the gang):

The Major (played by Cecil Parker), a conman, is a caricature of the decadent military ruling class. One Round (Danny Green) is the oafish representative of the British masses. Harry (Peter Sellers) is the spiv, the worthless younger generation. Louis (Herbert Lom) is the dangerously unassimilated foreigner. They are a composite cartoon of Britain’s corruption.

Here Mackendrick identifies him as a spiv and thus the threat incarnated as that of a  full-time criminal underclass rather than that of the young generation rebelling about style and music whose lawbreaking was of the casual juvenile delinquency kind. The flash dress styles of the wartime and postwar spivs connected with the flash dress styles of the teds, but they were fundamentally not the same class of people, even if some of the younger spivs must have worn the Edwardian fashions of the day like many in their age group in the early 1950s.

In this film, shot in the summer of 1955, there is no reason to suppose that the character Harry Robinson portrays anything in his sartorial style other than a teddy boy of 1955, although it is quite unclear who decided on the look (the director, the costume department, the actor or any combination of all those). Peter Sellers was approaching thirty when he was cast in the role of Harry in the spring of 1955. One of the actors, Herbert Lom, recalled in 1994 that Sellers at the time was “chubby and not very experienced” and, in his own estimation, Sellers reckoned it to have been “the first real film” of his career. Apparently, Mackendrick had first thought of Richard Attenborough who was 32 at the time and even less of a teenager than Sellers (from Ed Sikov’s Mr Strangelove: a Biography of Peter Sellers (2002)) all of which adds to the suspicion that Harry Robins was initially imagined as a spiv but dressed as a contemporary ‘equivalent’ a ted.

The drape seems to have a seam running down the middle at the back (economies imposed by a film which was not too interested in the intricacies of ted wear?) and is barely finger-tip length which last is correct enough considering the variety of wear. It is a darkish-blue drape contrasting with a lighter turquoise shirt. The tie is some kind of slim Jim fastened by a silver/gold tie clip. The trousers are not drainpipes and cover the socks; they are held up by braces. The belt appears to be a thin silver box-frame buckle. The shoes are some kind of brown suede creepers and the socks are a colourful diagonal patterned ones (burgundy backdrop with navy blue and light beige diagonals). We only get to see this amount of detail as Harry’s body is held by the remaining two gang members poised precariously over the embankment ready to be released as the next train passes). 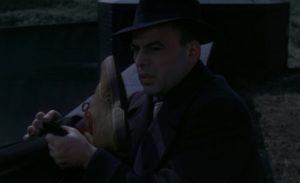 Others may have some reservations on the sartorial depiction, but the teddy-boy style depicted in the person of Harry Robinson in The Ladykillers seems largely accurate, which is hardly surprising since mid 1955 was as close to the heyday of the teddy boys as one could wish for.