Opening in May 1956, the British film ‘My Teenage Daughter’ was Britain’s answer to ‘Rebel without a Cause’. It was considered a hit at the time but is a much tamer affair and has less to say about teenage culture in general than its.

Director and producer Herbert Wilcox whose wife Anna Neagle) would also direct another ‘teen’ film ‘These Dangerous Years’ in 1957. 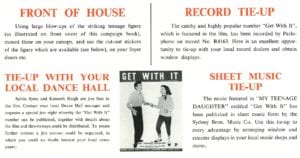