This 1957 colour film ‘Holiday’ is a great illustration of the traditional holiday season in Blackpool. 1John Taylor, the director was shooting a standard 1950s travelogue of the Lancashire Coast for British Transport Films and ‘Holiday’ was created from the spares by editor Ralph Sheldon who had established a reputation for setting pictures to music. This explains why some of the scenes are at Southport and at Morecambe although most depict Blackpool. It shows us a lot of activities and holidaymakers but nowhere are bedraped teds to be found although it was in the rock’n’roll era. One of the reasons was that the weather was hot and sunny and not suited to wearing drapes (one billboard notes the date Saturday June 1st 1957). There’s a good chance that many of the young men we see (for they are mostly quiffed) were teds who were wearing their other gear although we must face the apparent fact that not every cool young man wore drapes in mid-to-late 1950s Britain.

A YT commentator Chris Snelling (2019) says : “Yes they were good times but there were the darker side as well, flick knives, bicycle chains, cut throat razors carried by teddy boys. My mum was in a cafe in Blackpool and a load of teds came in and smashed the place up slashing one poor blokes face. She was in shock for days.” By 1957 I would hazard a guess that ted meant as much any group of badly-behaved young men as it did the bedraped kind.

Here are some screengrabs of some rocking looks and fashionable young women. If you want to see the whole film, go to the bottom of this page. 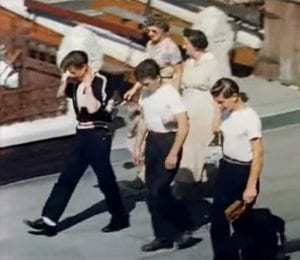 *Void 007 comments (2017) “I grew up in Blackpool in the 50s and 60s and it was an exciting place. With the advent of foreign holidays in the 1970s it started becoming very seedy and now is generally a depressing place with high rates of suicide drug addiction and unemployment. I remember thousands of holidaymakers swarming around the promenade really excited to be away from dreary lives in the Industrial North.”

Previous Post: « 1959 BBC documentary on New York youth gangs
Next Post: 1958 dancing to rock’n’roll at home in the East End »