This is most unfortunate because nothing remains of the show on film; this was long before the days of the ubiquitous video. One of the few clips one can see nowadays is that of the opening credits to the movie ‘Six-Five Special’, a train rumbling over the rails to Don Lang’s version of the title song.

*philphoto (2008IMDBcomm)  We were the first house in the street to have a telebox,and I seem to remember a train hurtling at me from the Television on the opening credits to 6.5 special which caused my siblings and I to dive behind the sofa. / My memories of the 50’s were of a very dull time ,it never stopped raining, everyone had ducks flying up the wallpaper, with a mirror over the tiled mantlepiece and a rug made of old socks in front of the fire. / The music was just as Dull I recall. Rock and Roll was starting to make an impact though although it was thought as slightly downmarket. / An episode of 6.5 special was aired on BBC 4 the other night and now I remember it had something for everyone- an article on mountain climbing in Wales, a silly sketch featuring Spike Milligan as a deranged butcher and of course lots of music that Auntie Beeb deemed ‘safe’ for their young viewers. / I then realised that the music on offer was as dull as I remember it at the time. Thank god for the Beatles. Lots of Nostalgia though, I hope we can see more of these programmes in the future.

Cherri Gilham (2007IMDBcomm) Not only do I remember it but I also was an audience member for one show that came to the Kursaal in Southend. Circa 1958, me 14 with my brother, nearly 16. Yes I did love Denis Lotis but he didn’t host that particular episode, sadly for me. Don Lang substituted which was for me rather disappointing. And as another IMDb poster pointed out, ‘well-brought-up gels’ didn’t like Elvis. It’s true. It was only ‘common’ girls who liked him in the very early days. What WERE we thinking? / My brother and I were lucky to get tickets (for 6-5 special), dunno how…….they were actually and unbelievably like gold-dust. But we spoiled it by having an argument on the dance-floor whilst jiving. Not a pretty sight in front of a live camera. I managed to follow it up years later by several more embarrassing appearances on *Live* TV……..viz Golden Shot, Thursday Night Live, & others I forget. Well I’m a pensioner now, so I’m allowed selective memory. 🙂 Besides Six Five Special, other defining moments in radio and early UK TV: Quatermass, (scary), Journey into Space, (eerie), The Goon Show, Round the Horn, (hilarious), Muffin the Mule, (yes really…ah bless him), Bill and Ben the Flowerpot Men, (flobbadob…joined by Weeeeeeed), In Town Tonight (STOP). And one I totally loathed but was forced to endure on the radio after Sunday lunch, to ‘let the food go down’.: Sing Something Simple. Might have been part of the Black and White Minstrel Show. I hated it. Six Five Special was an also-ran with teenage music show ‘Cool for Cats’, and the precursor for Top of the Pops.

*IanLouisiana (2006IDMBcomm) “How it all comes flooding back.Don Lang,the artist formerly known as Gordon Langhorn,stalwart of Ted Heath’s trombone section(no,not that Ted Heath) sang the signature tune every Saturday night and set the style for a peculiarly English form of pop and watered down rock ‘n’ roll performed by boys in nice sweaters and girls in dresses with hand-sewn sequins. They sang with dodgy American accents and strummed fortunately unamplified guitars and it was all very innocent.I used to watch it before going on the bus into Brighton to meet my chums in “The Coffee Lounge” for an evening of painful and fruitless lusting after the unattainable girls from the Grammar school who would occasionally spare us a contemptuous glance as they lit a Craven ‘A’.We liked Chris Barber and Lonnie Donegan,they liked Dickie Valentine and Denis Lotis;well brought-up girls didn’t like Elvis. “Six – five special” was one of the few programmes aimed at teenagers and we watched it because we became co-conspirators against our parents whose idea of music on TV was Eric Robinson and Mantovani.Despite the fact that presenters Pete Murray and Josephine Douglas were no longer in the first flush of youth they represented us rather than them.Quite what the irritating and frankly rather frightening ex-boxer Freddie Mills was up to I’ve never been sure.He was later found shot to death in his car in what was thought to be a gangland slaying at the time but it has since been alleged he was in a very dangerous liaison with a psychopathic pop singer suspected of murdering prostitutes.Not perhaps an ideal role model for adolescent boys then. But in 1957 all that was in the unimaginable future.My dad had seen Freddie Mills fight and thought being on TV pop show was “degrading”. Apart from two very brief appearances in shot the late Mr Mills has been left on the cutting room floor in the film version of the show,and we have to make do with Mike and Bernie Winters and a dog that is funnier than either of them.But it is the musical acts that we tuned in for and for lovers of 50’s kitsch there is plenty to savour ,from the silly story line featuring two elderly teenage girls on the way to London in a train packed with pop performers to the worst dance act I have ever seen draping themselves over a rickety cocktail bar and sliding on and off the stools,grimly determined not to overbalance. There is a surprisingly eclectic selection of music.A man called Desmond Lane(I believe he was known as “The King of the Penny Whistle”) playing neat clarinet on a tune called “The Midgets” originally written for the Count Basie Orchestra.In the audience I spotted a girl with “Blow Me” embroidered on her sweater which caused me to raise an eyebrow until I deciphered the rest of the message temporarily hidden by her bosoms.The full text read “Blow me down Desmond”. Sir John Dankworth and Dame Cleo looking impossibly young and optimistic play in a coach surrounded by milkchurns and sundry animals in wooden crates and the forgotten vocal quartet “The Ken-Tones” sing a surprisingly sophisticated arrangement of “Gipsy in my soul”.Jim Dale looking very embarrassed as well he might offers “The train kept a rollin'”to our two heroines in their compartment where there is no escape as he’s blocking the the door to the corridor. It’s left to veteran Ted Heath vocalist Joan Regan to give the best performance of the film when she sings “I’ll close my eyes” a beautiful but comparatively little-known ballad whilst wearing a frilly nightie and combing her hair before climbing into her bunk. When the train eventually reaches London we cut straight to the TV studio and a live telecast of “Six – five special”.There is an excruciatingly bad performance by 15 year old Jackie Dennis-you’d think his mum would have smacked his bottom and sent him home – and an amazingly good one from 15 year old Helen Shapiro.Dickie Valentine wears a straw boater and looks bemused,Russ Hamilton(did he really sell a million copies of “Oh yes we will make love”?)looks like a 30 year old college boy.Lonnie Donegan sings two of his least popular numbers but ex-Humphrey Lyttelton/Chris Barber bassist Mickey Ashman enjoys himself immensely while he’s doing it. The film offers a rare chance to see four girls doing the Hand Jive in synchronisation whilst chewing gum out of synchronisation – a disconcerting experience. Apart from pop historians nobody under 60 is going to want to watch this movie,but for anybody who lost their virginity to the strains of the Louis Armstrong All Stars 1954 recording of “Basin St Blues” it’s liable to make them go up in the loft and search for a very old and scratchy 78.”

Ron S. Lawrence (2008IMDBcomm) As a member of an up and coming group, the Eden Street Skiffle Group, I was in one of the earliest 6.5 Specials. We had made recordings and appeared many times on radio’s regular Saturday Morning Skiffle Club. Live TV was a different matter though. Five minutes before we were “on”, Jack Good bustled up to us and announced that we had to cut 45 seconds – or it may have been 90 seconds – from the number we were about to perform. This was the bluesy Easy Rider, and we had a frantic 5 minutes or so removing verses. / There being no video recording in 1957 we never got to see the performance although I do have a recording of the opening of the show introduced by Pete Murray and Josephine Douglas, who announces above the rather noisy background of the live (dancing) audience: “You have just come in by way of Laurie Gold and his Pieces of Eight with Rampart Street Parade, and the Eden Street Skiffle Group with Easy Rider”. Great fun it all was too. 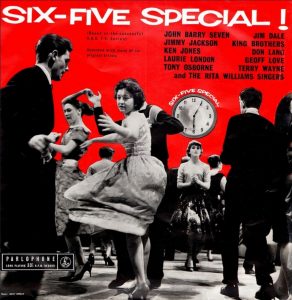