‘Morning in the Streets’ a 35-minute poetic depiction in film giving an “impression of life and opinion in the back streets of a Northern City in the morning”was directed by Denis Mitchell & Roy Harris in 1958 by the BBC’s Northern Film Unit (although not broadcast until 25 of March 1959). The city in question is never identified: scenes were shot in Manchester, Salford, Stockport and Liverpool, then combined as if capturing a single half-day in a single location. Because the film is impressionistic rather than journalistic, this artistically licensed deceit is easy to accept. 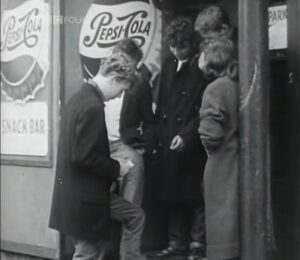