Aged 25, Bruce Davidson accompanied a teenage gang named the Jokers during the summer of 1959.

Davidson entered the lives of a South Brooklyn street gang called the Jokers whose usual haunt was a local candy store. 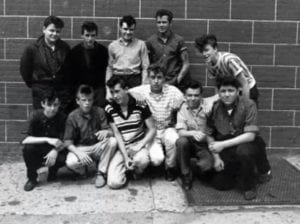 ”They had had a rumble that was written up in the newspaper, and I went out and offered to take photographs of their wounds, in color,” he said. He stayed on. ”They had a youth board worker with them, and I had a tendency to come when I knew he wasn’t going to be around.” Mr. Davidson was 25 at the time, living in a one-room walkup in Greenwich Village.

”I had a kitchen/darkroom combination with a red light in my refrigerator,” he said. ”I had a mattress on the floor, no girlfriend, and lived like a monk.”

The photographs today portray a lost world of stickball and boardwalks, of Vaseline hair and rolled sleeves, Kent Filters and Karl Droge Big Squeeze Ices, basement dances and Susie the Elephant Skin Girl at Coney Island. The atmosphere was tight and intense, filled with flinty looks and an almost accidental glamour, where tattoos were more a fierce indoctrination than a calculated lifestyle choice.

”He was kind of a brilliant visual guy,” Mr. Davidson said. ”He took me to this roof, and I remember thinking, ‘This kid’s going to throw me off the roof and then rob me,’ but he’s pointing down at the stickball game and saying, ‘Get that,’ and saying: ‘Oh, there’s the Statue of Liberty. You can see it through all these television antennas.”’

The images of that summer have an eternal quality to them, as if the gang might still be drinking beer in paper cups on the beach, but the Jokers’ world was already beginning to change. Heroin was making an entrance; one gang member died from an overdose at 19.

A few years ago, Bengie got in touch with Mr. Davidson.

”I went out with him to the old neighborhood,” the photographer said. The candy store where the gang used to hang out was gone. ”He took me for a cafe latte.” The neighborhood had changed, and so had the Jokers; Bengie is now a drug counselor, and Mr. Davidson’s wife is writing a book about his life.

When Queen magazine invited American photographer Bruce Davidson to visit the UK in 1960, it was for a series called Seeing Ourselves as an American Sees Us: A Picture Essay on Britain. Though Davidson had lived in the UK during the second world war, the magazine were hoping for an outsider’s view of a culture on the cusp of social revolution.

Known for his gritty reportage in Life magazine, Davidson was living in New York and had just finished one of his most memorable shoots, Brooklyn Gang, a series based around the Jokers, greasers with DA’s, tattoos and dangling cigarettes. Esquire wanted to publish some of them with Norman Mailer writing the text, but that required signed model release forms – so Davidson gave $200 to a gang leader named Bobby Powers [i.e. Bengie]. “I doubt anybody ever saw that money,” he says, “or he was really good at forging names cause obviously parents wouldn’t want you to have your picture taken in the context of a gangster.” Either way, Davidson started getting threatening phone calls and, at the advice of Magnum’s Cornell Capa, took the Queen assignment.

These photographs are charged with the sensation of growing up and living in a world before everything became a media spectacle. … One wonders how such an unmediated, honest, street level take would even be possible today.

Photographs from Davidson’s series initially appeared in Esquire (June 1960) with a text by Norman Mailer, Published in book form for the first time in 1998, text by Davidson & Emily Haas’ interview with gang member Bengie.

In 1998 Bengie reminisced over Lefty, “the first of the gang to die”, a line later lifted by Morrissey, the great magpie of youth culture, for his song of the same name released in 2004 (apparently referring to the Mexican gangsters of LA where he was living at the time).

In 1959, there were about 1,000 gang members in New York City, mainly teenage males from ethnically-defined neighbourhoods in the outer boroughs. In the spring of that year, Bruce Davidson read a newspaper article about outbreaks of street fighting in Prospect Park and travelled across the Brooklyn Bridge from Manhattan in search of a gang to photograph.

“I met a group of teenagers called the Jokers,” he wrote in the afterword to his seminal book of insider reportage, Brooklyn Gang. “I was 25 and they were about 16. I could easily have been taken for one of them.”

The previous year, Davidson had become a member of Magnum, having shown his work to his hero, the agency’s co-founder, Henri Cartier-Bresson. In 1958, he had similarly immersed himself in the world of a travelling circus for a series called The Dwarf, in which he photographed a performer with whom he formed a close friendship. “My way of working,” he later said, “is to enter an unknown world, explore it over a period of time, and learn from it.”

With the Jokers, the boundary between detached observation and immersion in the subject matter became even more blurred. “In time they allowed me to witness their fear, depression and anger,” he wrote. “I soon realised that I, too, was feeling their pain. In staying close to them, I uncovered my own feelings of failure, frustration and rage.”

Alongside Ed van der Elsken’s 1956 work Love On the Left Bank, an altogether more staged kind of social document, Brooklyn Gang stands as one of the first in-depth photographic records of rebellious postwar youth culture. The book is now hard to find and prohibitively expensive to all but the serious collector (about £800 for a first edition, £300 for a second), but the Brooklyn Gang series is included in the first book of the epic three-volume Davidson retrospective, Outside Inside, just published by Steidl.

For several months Davidson followed the Jokers on their endless wanderings around their Brooklyn turf and beyond. He captured them hanging out in Prospect Park, where outdoor dances were held on weekend summer nights, and lounging on the beach at Coney Island. He snapped the young men as they killed time in a neighbourhood diner called Helen’s Candy Store. In his photographs, the Jokers look both tough and innocent, uncertain adolescent kids caught in that hinterland between childhood and – this being New York – premature adulthood.

Davidson’s black-and-white images are cool and evocative, imbued with a sense of time and place that is palpable. The gang shared a working-class, Italian-Catholic background, but look like they have walked straight off the set of West Side Story. The girls are timelessly hip in tight pants and white tops, with pinned-up piles of jet black or peroxide blonde hair. The male dress style is Italian hipster meets American rockabilly – Sinatra meets Elvis. The threads are sharp, the hairstyles tall and quiffed, and the attitude, as caught by Davidson’s camera, is either defiant or aloof to the point of disinterested.

Behind the cool facade, though, lay a world of trouble that began to engulf the Jokers as Davidson trailed them. When Brooklyn Gang was finally reprinted by Twin Palms Press in November 1998, it included an extended afterword by a 55-year-old man known as only as Bengie. At 15, Bengie had been one of the youngest members of the Jokers. He recalled his chaotic childhood as the son of alcoholic parents, and the beatings he received at school from priests and nuns. He remembered that the younger Jokers were into “drinking beer, smoking pot, maybe popping a pill here and there”, and how the heroin came later, via older gang members. He reminisces over Lefty, “the first of the gang to die”, a line later lifted by Morrissey, the great magpie of youth culture, for his song of the same name.

“If you see Jimmie, he’s like the Fonz, like James Dean–handsome,” Bengie says of Davidson’s photographs of one of the older members of the Jokers. “Later, though, the whole family, all six of them – Charlie, Aggie, Katie, Jimmie, the mother and the father – died; wiped out, mostly from drugs.”

The saddest story belongs to Cathy, the blonde and beautiful young girl whom Davidson photographed several times and whose reflection he caught unforgettably in a cigarette machine as she fixed her hair while waiting for the Staten Island ferry. “Cathy was beautiful like Brigitte Bardot,” Bengie remembers. “Cathy always was there, but outside … Then, some years ago, she put a shotgun in her mouth and blew her head off.”

Brooklyn Gang, then, is a document of inner-city youth culture at a time before the term was even coined. It is also a requiem for a bunch of Italian-American kids who bonded and, for a time, found a kind of community that had been denied them elsewhere – at home, in the church, at school. One of Davidson’s photographs, a couple entwined in the back seat of a car, has attained a late iconic status after being used by Bob Dylan on his 2008 album, Together Through Life. The blonde-haired girl may even be Cathy.

Frank Centola [YTcomm 2020] comments : “I was one of them. 1956-1959. After that it all broke up. I belonged to a crew called Fulton-Rockaway. All had nick- names. Mine was Frankie Bep, a stand up guy. No drugs or guns. Different world. went into army then college. Became executive at ABC Network and 20th Century Fox Finally federal agent. FR is the only time of my life I look back with fondness.”

James McIntyre [YTcomm 2018] in reply to a comment “no guns” responded : “In those days they had weapons they hid them to be used later in street brawls Switchblades, Metal pipes, 2 foot long cut off sections of garden hose filled with sand, and in some cases homemade guns they were called a Zip Gun. If u want to know more about this Era read the book called The Cross and the Switchblade.”

Serge Butler [2019 YTcomm] : “These young guys were in a gang called the jokers {yes they were a gang } . They lived in a predominately irish neighbourhood near prospect park brooklyn . The blond girl fixing her hair in the cigarette machine mirror fell pregnant to her boyfriend called Junior {one of the romeos of the gang } . The baby died from some sort of illness and she put a gun in her mouth and blew her head apart .A lot of them died early from violent fights ,heroin and alcoholism.”