From an Italian film titled ‘Europa di Notte’ (‘Europe by Night’ or ‘European Nights’ at its American release in 1963) (1959) looking at nightlife in European capitals Rome, Paris, London, Madrid, Vienna, Brussels and more.

EUROPEAN NIGHTS (1959) is a typical MONDO MOVIE, and Gualtiero Jacopetti, popular director of such documentaries in the early 60’s, joined this production as co-writer. A tour of nightclub acts in major European cities begins in Paris with the belly dancing of Princess Badia. At Le Carrousel de Paris, the female impersonator Coccinelle performs. At the Crazy Horse Saloon, stripteasers Dolly Bell, Lady Phu Qui Cho, and Lilli Niagara entertain, as do The Tongas, Swiss acrobats. La Nouvelle Eve is the showplace for the Charley Ballet. The Place Pigalle hosts the Archie Savage Dancers, an American Negro jazz ballet group; comic singer Henry Salvador, who sings Brahms’ “Hungarian Dance” and performs “Dans mon île” with a group of oriental dancers; and Robert Lamouret, who entertains with his duck. In London, magician Channing Pollock performs at the Pigalle Restaurant, and Colin Hicks sings rock and roll to an audience of hysterical teenagers. The Rastellis perform their musical clown act in Milan. Domenico Modugno sings in Naples, and The Platters sing in Rome. In Vienna, the Ukrainian Orlyk Dance Group and Bandourists Chorus dance and sing to the music of bandouras. At Madrid’s El Corral de la Moreria, film star Carmen Sevilla joins Gypsy flamenco dancers.

Shortly thereafter Colin Hicks went back to South Africa [in spring of 1957 he was a cabin boy] this time with his Cabin Boys, then he was booked on a package tour of Italy with the Platters, Ramblin’ Jack Elliott and the Trio Raisner which started on 7 May 1958: headlining in Milan, Venice, Bari, Brindisi, Naples, Rome, Genoa.

Bryan Gregg (Cabin Boys’ bass guitar, YTcomm 2011) confirms that this was line-up #3 of the Cabin Boys who were around between August and November 1958.

Following their appearance on ‘Europa di Notte’, Colin Hicks was starring at the Granada in Kensington London, with a show called “The Colin Hicks Band Show”, which also included Johnny Duncan & his Blue Grass Boys, Nancy Whiskey and The Southlanders. The Cabin Boys were supplemented by guitarist Joe Moretti who’s just arrived in London directly from Scotland. 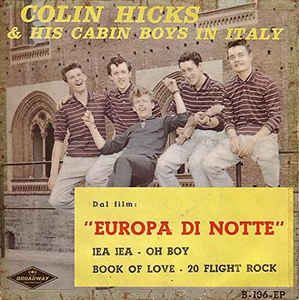 In September 1959, Colin Hicks checked out the latest arrivals at the 2is coffee Bar and recruited a new set of Cabin Boys: Dave ‘Zom’ Tick on guitar (ex-Vipers), Rod ‘Boots’ Slade on bass, and Mike O’Neill on piano (ex-Clay Nicholls & The Blue Flames). Jimmy Nicol, the original drummer, provided a thread of continuity.

They accompanied Hicks for 4 months work in Italy, where they had rave reviews about their rock’n’roll show through a Cameo in the Italian financed and directed documentary movie “Europa di Notte” (Europe By Night). 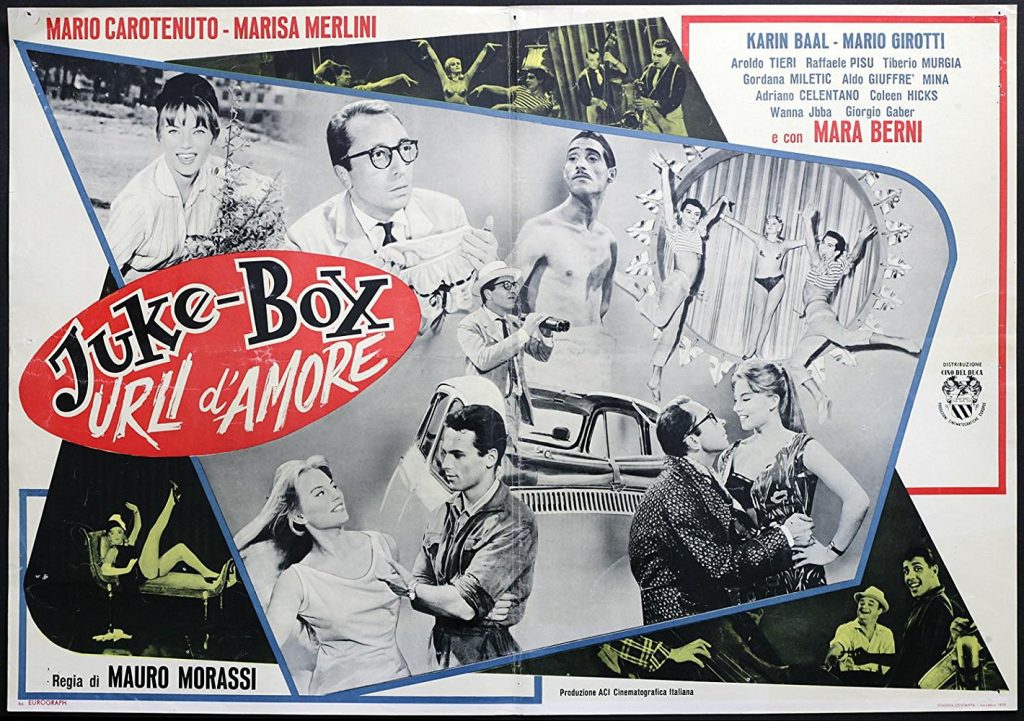 Note Colin Hicks is named Coleen Hicks on the poster of the film.

Here from the film ‘Juke-box urli d’amore’ (released in November 1959) we see Hicks and the boys perform ‘giddy-up a Ding-Dong’ [playback disabled, press play button, then Watch this video on YouTube]. 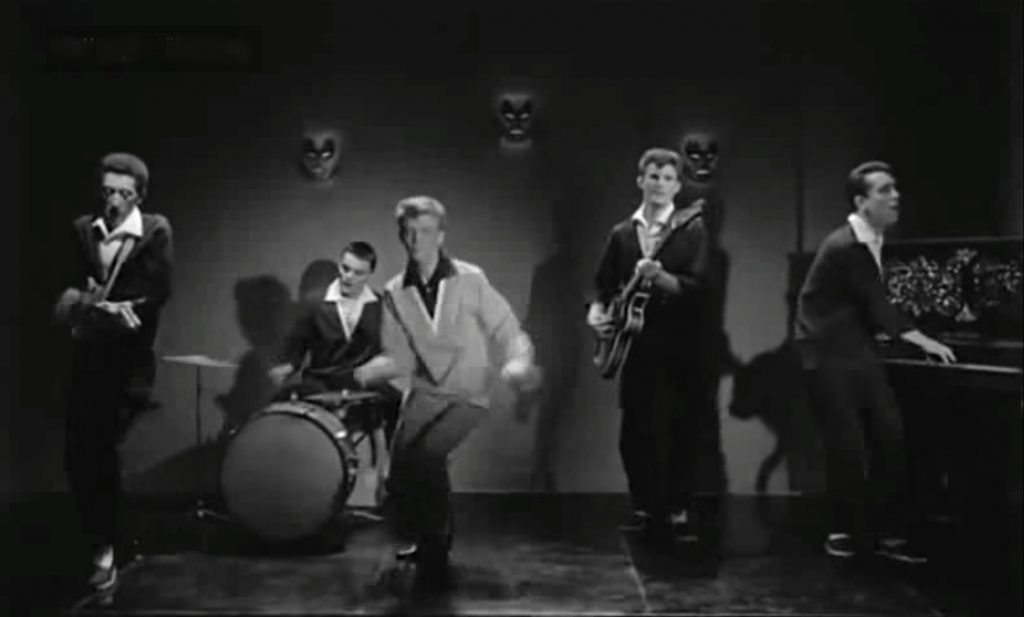 They then parted company with Colin Hicks who choose concentrate on Italy.

Mike O’Neill hitch-hiked from Leigh, Lancashire, to London, where he was instantly hired-first by Clay Nicholls in late 1958, and then Vince Taylor in Summer 1959. He then lived in a madhouse flat at 39 Old Compton Street in Soho, London.

In September 1959, he was recruited by Colin Hicks as pianist of his backing group The Cabin Boys along with Dave ‘Zom’ Tick on guitar, Rod ‘Boots’ Slade on bass, and Jimmy Nicol, the original drummer.
They accompanied Hicks for 4 months work in Italy, where they had rave reviews about their rock’n’roll show through a Cameo in the Italian financed and directed documentary movie “Europa di Notte” (Europe By Night).
In the Alessandro Blasetti film, Colin Hicks and his group appeared singing “Giddy Up A Ding Dong”, which had proved to be a big hit in Italy, resulting in a lucrative invitation to tour there.

In late 1959, Jimmy Nicol left to join Vince Eager and his Quiet Three (1). Laurie Joseph Jacobson aka “Laurie Jay” from a Tottenham-based band called The Nu-Notes replaced him.
At this time, The Cabin Boys always opened the show just before Colin.
Probably inspired by the surrounding scenery and the Italian “Peplum” movies, The Cabin Boys decided to change their name to Nero & the Gladiators, backstage at the “Teatro Olympia” in Milan. They then parted company with Colin Hicks who choose concentrate on Italy.

Upon their return to England in January 1960, O’Neill and ‘Boots’ Slade got a publishing deal-and spent the advance on an echo unit (Binson echo chamber), which gave the New band their “Italian sound” – as advertised on the posters when they were supporting Gene Vincent and Eddie Cochran. On the same bill was another Leigh lad Georgie Fame, who moved into Mike’s flat when he was in Italy. Georgie Fame introduced them to Colin Green who was then the lead guitarist with Billy Fury’s backing musicians the ‘Beat Boys’.

O’Neill originally recruited Green to play guitar on their debut single, “Entry Of The Gladiators”, a dramatic instrumental recorded at IBC studios. It was released on Decca only in March 1961, reaching #39 in the British 45 rpm single charts, and later became the Leigh Rugby club’s official hymn.

Mike O’Neill  Before they left, however, O’Neill and the group’s bass player, Rod “Boots” Slade, obtained several sets of gladiator costumes, largely made of plastic, which had been used in the 1951 movie, Quo Vadis, filmed at the Cinecittà studios in Rome. Probably inspired by the surrounding scenery and the Italian “Peplum” movies, the Cabin Boys decided to change their name to Nero and the Gladiators, backstage at the “Teatro Olympia” in Milan.

The group performed in their gladiator costumes, with “Nero” (Mike O’Neill) wearing a toga and a laurel wreath crown.

They brought out a guitar instrumental 45 in entered the UK Singles Chart in March 1961, rising to #37

was later adopted as the theme tune of Leigh rugby league club. The follow-up, “In the Hall of the Mountain King”, by Edvard Grieg, reached #48 on the chart, with guitarist Joe Moretti having replaced Green who had joined Georgie Fame’s Blue Flames. It was not broadcast on BBC radio, because of the Corporation’s policy, initiated by Sir Arthur Bliss, of banning pop versions of classical tunes. [Wikipedia s.v. Nero and the Gladiators]

When Johnny Kidd & The Pirates topped the British charts with “Shakin’ All Over” in Summer 1960, Hicks modelled his act on them. Incidentally The Pirates’ bass player was none other than a former Cabin Boy, Brian Gregg.

Included performances by the Platters in Rome.