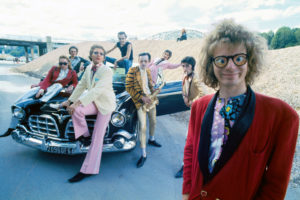 The earliest bands of the 1970s rock’n’roll revival didn’t always have a dress code that chimed with the 1950s (think Sha-na-na in America, Memphis Bend and Showaddywaddy in Britain). In France a group called Au Bonheur des Dames (‘At the Ladies Pleasure’, the title of a novel by Émile Zola on a department store, go figure …) formed in 1972 played mostly parodic rock’n’roll and swing songs. Their style was somewhat in the Bonzo Dog Doo-Dah Band vein with an attitude which would soon be called punk. Here they are performing ‘oh les filles !’ in 1974.

‘Oh les filles !’ (‘Hey girls !’) was a reprise of a song released by little-known French rock’n’roll group Les Pingouins from 1962 which you can hear here.

Despite the evident bad sound quality of this recording it contains great guitaring and the words – if you understand French – are an improvement on the American original which is of course Rusty York’s ‘Sugaree’ from 1959. Next we see them performing the Chats Sauvages’ 1961 hit ‘twist a Saint Tropez’ on television in the early 1970s. Note the rockers and the national servicemen in the audience, part genuine and part set-up.

In this period of starvation of real rock’n’roll bands, Au Bonheur des Dames was a breath of fresh air and were appreciated by many; as *Samyn Rue Watt recalled in 2017 : “I was able to see Au Bonheur des Dames in Montreuil in 1974, in front of a crowd of more than a thousand people, the majority of which were probably less than 20 years old. When the band came onto the stage we thought they were clowns, but when they started to play, their rhythm and craziness got to everybody, the crowd let itself loose …”. Here are two performances of their 1988 ‘roulez bourrés’ (‘drive drunk’) from the airwaves which was banned for obvious reasons …