Which each season approximating a year, the timeline of the series roughly represented the years 1955 to 1965.

Series 5 which was supposed to be 1959 sees the introduction of Chachi with his flowing 70s hairstyle. 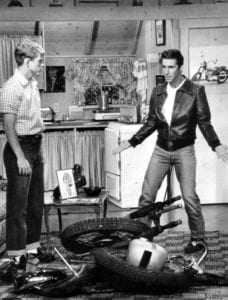 Winkler opened up about how an act of rebellion led to Fonzie being allowed to wear a leather jacket in an exclusive clip from the ABC special, The Happy Days of Garry Marshall. When the series premiered in 1974, ABC didn’t allow Winkler to wear leather so the show’s creator Garry Marshall found a loophole. / “Garry went to ABC and he said, ‘Ya know? He could be hurt if he’s riding a motorcycle and he falls off and he’s not wearing leather. He could be scraped.'” / This argument convinced the network to change its mind, allowing Winkler to wear a leather jacket but with one caveat: only in scenes where Fonzie was with his motorcycle. Marshall promptly called up the show’s writer’s room and explained that they were never to pen scenes where the Fonz was separated from his bike, even when he was indoors. Once the show hit its peak, the network no longer minded the leather jacket.

The original tan McGregor windbreaker Winkler wore during the first season was eventually thrown into the garbage after ABC relented and allowed the Fonzie character to wear a leather jacket.