The Christmas special (broadcast between Series 1 and 2), set at RAF Skelton, was captioned “Christmas 1955”, but the remainder of the series (involving two changes of camp) continued to be set in 1955.

Robert Lindsay starred as teddy boy Jakey Smith with an irreverent attitude to the army.

Another moment of fame, again in 1974, was when the Barracks were used as the location for filming the television sitcom Get Some In. Filmed between 1974 and 1977, the series ran between 1975 and 1978, with thirty-four episodes and one special, on Thames Television. The comedy series, written by John Esmonde and Bob Larbey of Good Life fame, was set in the National Service days of the 1950s, and was about four young RAF trainees, played by Robert Lindsay, David Janson, Brian Pettifer and Matthew Ryder, and their dealings with the hated Corporal Percy Marsh, played by Tony Selby. In the first four seasons, Robert Lindsay, being over on by Karl Howman in the fifth, played the character of Jakey Smith. Much of the filming for this series took place at the old Ration Stores, now demolished.

In episode 7, on a 36-hour pass, Jakey returns to his old haunts only to be made fun of by his former ted friends 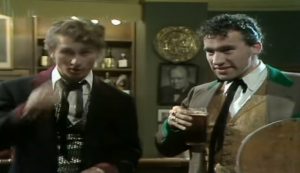