‘Cat talk’ (or ‘bop talk’, or ‘hep talk’, and even ‘jive talk’ or simply ‘jive’) emerged in the later 1930s as the kind of ‘in’ way of talking adopted by jazz musicians and aficionados. In the post-1945 it started to become popular among the Americans masses. An individual who had much to do with the popularisation of ‘cat talk’ was 1930s swing superstar and scatman extraordinaire Cab Calloway published a Hepster’s Dictionary in 1938 (updated five more times until the 1944 sixth and last edition).1The New Cab Calloway’s Cat-ologue: a Hepster’s Dictionary (1939, 2nd edn), The New Cab Calloway’s Hepsters Dictionary: Language of Jive (1944, 6th edn). It was in reality more of a pamphlet than a book and featured 200 or so expressions from the slang widely used at the time among jazz musicians and the demi monde of Harlem, New York City’s black district, partly in order to help fans understand his lyrics.

Babs Gonzales published his Be-bop dictionary and history of its famous stars in 1963 through his Expubidence Publishing Corporation (his LP ‘The Expubident World of Babs ‘Speedy’ Gonzales’ 1968). 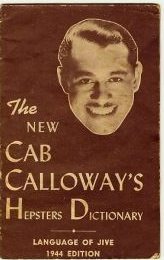 Calloway defined this way of talking as ‘jive‘ or ‘jive talk’ but as it became popular at about the same time as the emerging bop movement in jazz it became known as ‘cat talk’. 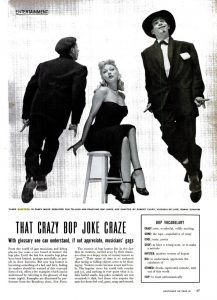 Here’s a bopster joke from the same magazine: “Two bopsters go into a hash joint. One orders a piece of pie. ‘Sorry,’ says the waitress. ‘The pie is gone.’ ‘Oh, that crazy pie!’ cries the bopster. ‘I’ll take two pieces!’

also Straight From the Fridge, Dad: A Dictionary of Hipster Slang, No Exit Press, 2000 (2009 is now in its third, most luxurious edition yet, augmented by some amazing pulp paperback covers, film posters and records from your extensive library of cool.)

Dallas singer Lew Williams’s ‘cat talk’ first recorded March 1954 show’s how the cool speaking style had by then reached and impacted America’s rural heartland. It was recorded again in June 1954 and yet again for Imperial in November 1955 (released in June 1956) – it’s the version you can hear here :

Journalist Steve Allen, who would head a nationally syndicated show bearing his name from June 1956, and who was markedly more sympathetic to the emerging rock’n’roll performers than were his rivals Ed Sullivan or Perry Como, published a book entitled Bop Fables in 1955 in which famous nursery tales were retold in cat talk. 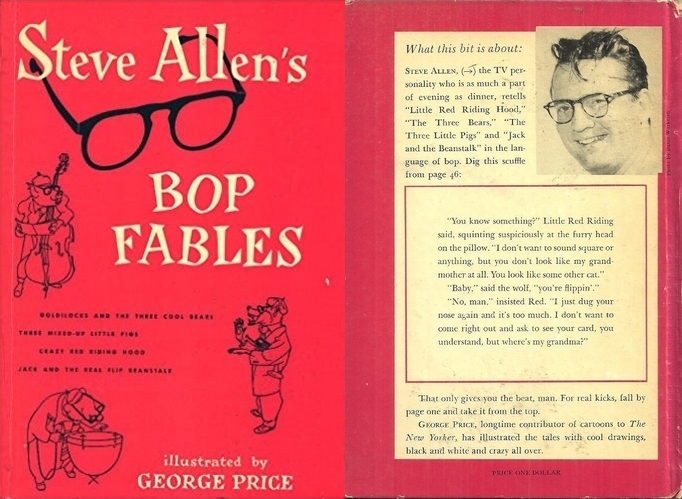 By the way, see the account given Shane Brown’s article on Steve Allen which debunks the idea prevalent among Elvis fans that Allen hated rock’n’roll music.

The last scene where the protagonist [NAME] gives Sir Bop a dressing down for speaking the way he does is almost touching. The once cool look of 1940s hepsters was increasingly looking passé to the rock’n’roll teenagers of 1950s America and it’s effectively buried in this scene.

Just listen to how the teen fans of rock’n’roll compete with each other to speak cat talk in this documentary clip (poor quality unfortunately) defending rock’n’roll against the mayor of Jersey City’s decision in July 1956 to ban Bill Haley and the Comets from playing at the Roosevelt Stadium (they are playing their own version’s of Haley’s ‘tock around the clock’ and the Cleftones’s ‘little girl of mine’). By the way, it was Haley’s experience in Jersey City which was the motivation for composing his song ‘teenager’s mother’ which defended rock’n’roll.

There was another kind of ‘bop talk’ – a disguised language in which –op was added to every consonant – which is attested in 1970s America in the words of a certain Bruce : “Bop talk was a fad language when I was in school in the 70’s. You placed the letters op after every consonant and prounounced the vowels long. My name – Bruce – was spoken as Bop-Rop-U-Cop-E [Answers.com s.v. bop talk]. ‘Bop talk’ didn’t mean this in 1950s America, but the same type of disguised language is seen in Dick Robinson’s ‘bopping Martian’ in the summer of 1958 where the Martians’ chorus goes like this : ‘gIBo, mIBan, gIBo! / rIBock! rIBoll! / gIBo, mIBan, gIBo!‘.

Cat talk suffused the world of the 1950s teenager and rock’n’roll song lyrics. The vocabulary is mostly too well known to bother illustrating (cat, chick, dig, flip, cool, mostest, etc.) but some of them are likely not to be understood nowadays, such as the following :

‣ When Sonny Burgess waxed ‘truckin’ down the avenue’ in late 1957, he wasn’t singing a “truckin’ song” so beloved of country music later on, as the verb truck simply meant ‘going’ in cat talk.