How could have rock’n’roll revived after the 1950s without people like Dan Coffey of Newport in South Wales? Someone sometime would have got round to it, no doubt, but how is it that it fell to this Newport lad to pioneer the rediscovery of a magic era in American music? Dan was with still with us just a few years ago and I had just discovered that he was living in County Fermanagh, not too far from where I was living. This set me planning about getting to meet him with a hope to interview him about his early rock’n’roll days and the pioneering work he did in bringing unknown gems and artists to our attention when he died …

I never got to meet him and I think I missed an experience but – for all you teds out there – this is what I was able to glean about this man who was never a star in the ordinary understanding of the word but yet is surely now up there alongside all the greats in rock’n’roll heaven. 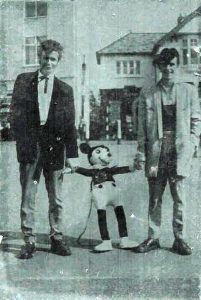 Dan (R) and a ted friend returning with their winnings from Barry Island fun fair, 1960-61

Dan was brought up in Newport, a small industrial city in South Wales. A funny thing about Newport is that it is not archetypically Welsh and the inhabitants – along with those of Cardiff whom they resemble more than they would care to admit – actually call other Welsh people Taffs, namely their neighbours from the industrial coal-mining valleys of South Wales. This separateness of the Cardiff-Newport populations from the rest of the Welsh is due to the higher mixing of Welsh, English and Irish in these cities with a resultant mixture of accent and attitude which is quite peculiar for if they are not typically Welsh neither are they – by a long shot – typically English. The peculiarity of the population of Liverpool comes to mind.

A product of this population ferment, Dan was born to Irish parents who had moved here. 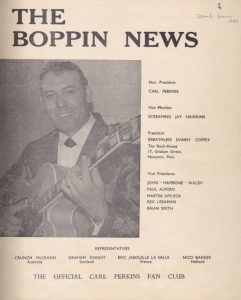 1964 first issue of The Boppin News