The Hepsters – not to be confused with modern Hipsters – were associated with jazz, both musicians and fans.

It is worth noting, too, that Gillespie had already gained a measure of stardom at a time when Parker’s following was limited to musicians and other insiders; Parker was not even mentioned in a silly 1948 Life magazine article on the bebop ”craze” that correctly identified Gillespie as the man responsible for the sudden popularity of berets, horn-rimmed glasses and goatees.

[In October 1948] Life magazine ran a cover story on Dizzy Gillespie who found his concerts attended by young people eager to speak bop talk and emulate their heroes. As he remembers. ‘I looked around, and everybody was trying to look like me. Now, why in the hell did they want to do that? They even pretended to laugh like me (the newspapers said) and it was not a racial phenomenon. These were black and white people alike, by the tens of thousands, willing to stand up and testify to bebop.’ / The language of bop musicians quickly became conventional American slang. Their philosophies helped inspire an entire generation of social critics, whose bohemian culture itself reached a mass acceptance in the sixties. [1994. Rainbow at Midnight:Labor and Culture in the 1940s. (Urbana ILL: University of Illinois Press), 274]

Dizzy Gillespie was “so completely synonymous with bebop that the 1948 New Yorker profile of him is simply titled ‘Bop’.” [Jon S. Panish. 1997. The Color of Jazz: Race and Representation in Postwar American Culture. (? : University of Mississipi Press),  9]

Here on the right is a white hepster portrayed in the 1949 film ‘D.O.A.’. The film gives a good idea of the hepster scene at the time as the main characters  decide to ‘slum it’ bygoing down to the Fisherman nightspot where the bop scene is buzzing with a hep crowd (note the S. S. Jive lifebuoy behind the band). 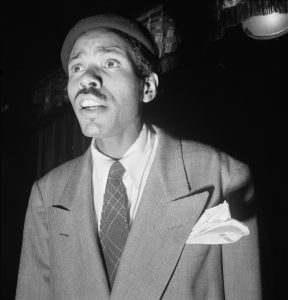 Here is Babs Gonzales (1919-80), you can read about this mover of the be-bop scene elsewhere, we are just including this picture to show another instance of the hepster style. 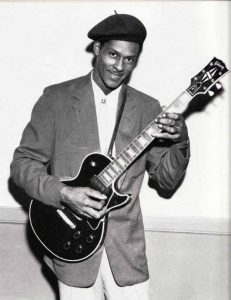 Chuck Berry also at times got on the act as can be seen from this picture.

The last scene where the protagonist ‘Shorty’ (Dick Miller) gives Sir Bop a dressing down for speaking the way he does is almost touching. The once cool look of 1940s hepsters was increasingly looking passé to the rock’n’roll teenagers of 1950s America and the style is effectively buried in this scene.

Previous Post: « Babs Gonzales, the hepster from ‘Oo-poo-pa-doo’
Next Post: Were the 1950s teds colourful or not? »