In the 1960 documentary ‘Living for kicks’ (see blog 1960 ‘Living for Kicks’) in the piece filmed in Brighton’s ‘teenage town’, Whiskey-a-gogo coffee-bar known as ‘The Club’ we come across “one of the main characters there” a poet named Royston Ellis. 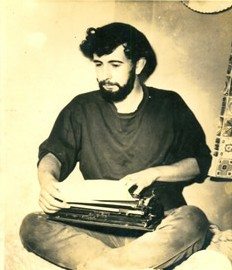 3:46– Farson interviews Royston (4:54 “No teenager will marry a virgin”) [other teenagers are dubious]

Farson: Are there such things as teddy boys left?

Royston: Oh, please, spare me that! I have heard of one, he’s uhm … he’s called Seamus and he lives in Ireland. But apart from that there aren’t any in Brighton, unless there old men about 60, camping it up a bit …

Royston: Yes, I think so, well he went out about 5 years ago, didn’t he? That’s one of the troubles, the press regards teenagers as teddy boys, and we’re not you know, and neither are we dissipated yobs corrupted by crime, sex, drinking. We’re just a bunch of kids out for kicks.

Royston Ellis was born on 10 February 1941 in Pinner, England, and educated at state schools until he left age 16, determined to be a writer.

Born Christopher Royston George Ellis, on February 10, 1941, in Pinner, England, he attended state school there until the age of 16.

In 1959, by the age of 18, when he started to publish poems, heavily influenced by the American Beat poets such as Jack Kerouac or Allen Ginsberg, he already wore a beard, looking like a beatnik. In the following clip we see him performing  ‘gone man squared’ with the Drifters as a backing band at Battersea Town Hall in 1959:

EXTRACT part where he describes meeting the Drifters and putting his first book ‘Jive to the Gips’. His poetry influenced by the urge to describe the teen jazz clubs he’d frequented since 1957 [‘4 years ago’].

In June 1960, he travelled to Liverpool, England to perform a poetry reading at Liverpool University. As he usually read his poetry with backing from jazz musicians, Ellis searched among the locals for suitable musicians to accompany him and met the young group known as the Beatles.[3]

2013 interview given to the International Business Times [www.ibtimes.com/beatles-1960-liverpool-royston-ellis-remembers-996876]

“Liverpool was certainly grim and gloomy and seemed to me, as a product of the [London] Soho street school of rock-and-roll, beatniks and jazz, to be unenlightened.”

I started writing poetry and getting published in 1957 (at age 16) before I was made aware of the American Beats. It was the commentators in the 1960s who introduced (and compared) me to their work.

The poetic influence on me actually came from British poets like Christopher Logue (with Jazzetry, poems read to jazz) and Bernard Kops, both published by John Rolph of Scorpion Press, who introduced me to them and published my first book of poems, “Jiving to Gyp,” in 1959.

When I appeared at university societies (such as Heretics, Cambridge, and debating at the Cambridge Union) they were indeed students and (pseudo) intellectuals. However, when I appeared at places like Battersea Town Hall (backed by Cliff Richard’s group, The Drifters [later The Shadows]), they were working teenagers and happy layabouts.

When I appeared in 1961 at London’s Mermaid Theatre with my regular guitarist, Jimmy Page (who later formed Led Zeppelin), they were cultured adults.

The meeting [with the Beatles] was by pure chance, as I have recounted elsewhere. I met a boy in the Jacaranda club (my first stop on arrival) and told him I was in Liverpool to perform my poetry, and he rushed me off to meet his buddies at 3 Gambier Terrace. I liked the bohemian atmosphere there (thanks to Stuart Sutcliffe’s art works) and they [the Beatles] all seemed to like me (even though they were perhaps a bit overawed by the unexpected arrival of a famous beatnik teenager from London), so I stayed.

John was certainly the one with the most energy and inquiring mind, eager to learn and always asking a lot of questions. The only “troubled soul” I sensed about him was the anguish of whether to continue at art school or to follow music full time.

I told him emphatically that he should quit art school and follow music, using my own career as an example. I told him I walked out of school as soon as I was 16, determined to become a writer. I hoped my successful career as a published poet and TV performer at 19 would help give him confidence to do the same thing.

He never went back to art school.

we did have general conversations about what we wanted to do in life. I told them that I, as a poet, wanted to make my poetry popular, hence “Rocketry,” poetry performed to rock music.

We once had a discussion about what we wanted to be and I said “I want to be a paperback writer,” because being published in paperback was then a sign of popular success. (The phrase later became part of one of the Beatles’ biggest hits [IW later]).

I went only to the Jacaranda, a scruffy, youth dive with a juke box. Yes, I did sense the Beatles had something special — as people, as well as musicians — which is why I invited them to come to London to back me on my TV performances. Before that happened they went to Germany, although John did invite me to go with them as a sort of poetic “compere.”

It was when I suggested to John that they come to London that I asked him his group’s name. When he told me, I asked him how he spelt it. He said they got the idea from the nickname for the Volkswagen car (Beetle). I said since they like the “Beat” way of life, were “Beat” musicians and would be backing me as a “Beat” poet, I suggested to him why not spell the name with an “A”?

I don’t know whether John had already considered that spelling but it was my encouragement that made him choose it permanently.

His often-quoted story of the name being given to him by a “man on a flaming pie” is a jocular reference to the evening I cooked a frozen chicken pie and mushrooms for dinner for the boys — and girls — in the flat and managed to burn the pie.

I don’t know about marijuana. However, John himself reported in International Times (in 1973) that I was the first person to turn him, Paul, George and Stuart onto drugs by introducing them to the way to get high by chewing the Benzedrine strips inside nose inhalers — as was the fashion then in London.

I didn’t live in Liverpool. When I was 15 I lived in Malpas, Cheshire, near Liverpool, working on a farm (having run away from school for a few months), and visited Liverpool then. My next visit was when I stayed at Gambier Terrace. I can’t remember how long; probably about a week — but it was indeed a momentous week for all of us!

By 1962 I had retired from performing to concentrate on writing and I moved to the Channel Islands. I did see the Beatles performing in Shrewsbury (UK) and we spent time together then.

We re-bonded when they visited [the islands of] Jersey and Guernsey to perform, and John himself told Playboy that the song “Polythene Pam” [from the “Abbey Road” album in 1969] was inspired by a night he and I shared with a girl at my flat in Guernsey wearing black polythene. This was because John liked my poem “I long to have sex between black leather sheets …” but we had no black leather.

IB TIMES: In 1963 you wrote a novel called “Myself For Fame.” Was the chapter in Liverpool an account of your experiences with the Beatles?

ELLIS: Yes, and it probably accurately reflects what happened then as it was still fresh in my mind.

I missed most of the momentum [of the rise to fame of the Beatles] as I lived in the Canary Islands from 1963-1966, and then in Dominica [in the Caribbean] from 1966-1979, where their music did not mean so much — and I was concentrating on my writing.

I liked their early music and indeed my tastes changed from the traditional jazz of my teenage years to their style of pop. However, I soon became heavily influenced by Caribbean reggae and Cadence music

While I was living in Dominica (during which time I wrote the several bestselling series of historical/slave novels called “The Bondmaster” as Richard Tresillian for U.S. publisher Warners) there was a hurricane in 1979 that blew down my hillside log cabin. Fortunately, three weeks before I had insured it — so I took the money, put it in a briefcase, and set off to see the world. I stopped over in Sri Lanka on my way to Sarawak [Malaysia] where I was going to write a novel based on James Brooke, the “White Rajah” of Sarawak.

I did the research but returned to Sri Lanka as a peaceful place in which to write, in contrast to the Caribbean. I never finished that novel but instead wrote a historical trilogy set in Sri Lanka, as well as four historical novels set in Mauritius and one based on the life of the Maldives 16th century national hero, Mohamed Thakurufaanu.

[IW Of course, Ellis may – with hindsight – have invented or coloured his dealings with the Beatles but I’m minded to believe him.]

Ellis bonded with John Lennon in particular, both sharing an enthusiasm for the American Beat poets, and spent the week at 3 Gambier Terrace with Lennon, Sutcliffe, et al.[4] Lennon saw Ellis as “the converging point of rock ‘n’ roll and literature”.[5]

Ellis said of the meeting, “I was quite a star for them at that time because I had come up from London and that was a world they didn’t really know about”.

According to Lennon in the International Times: “The first dope, from a Benzedrine inhaler, was given to the Beatles (John, George, Paul and Stuart) by an English cover version of Allen Ginsberg — one Royston Ellis, known as ‘beat poet’ … So, give the saint his due.” Ellis also claims that he suggested the re-spelling of Beetles to Beatles.[3]

In 1960 Royston Ellis caused a nationwide controversy by his remarks on teenage lifestyle in the TV programme Living For Kicks. In 1961 his book survey of pop music at the dawn of the Swinging Sixties The Big Beat Scene was published, reprinted with additional comments in 2010 by Music Mentor Press.[9]

At 20 Ellis retired from the teenage beatnik and rock and roll scene and left England permanently for a life of travel that took him to East Berlin and Moscow, where he read his poetry on stage with the iconic Russian poet Yevgeni Yevtushenko. Then, via Guernsey where be became a registered ferry boat engineer, he sailed to the Canary Islands and acted as an Arab with Cliff Richard in the movie Wonderful Life. He stayed in Las Palmas for three years, becoming the editor of the islands’ English language newspaper, The Canary Islands Sun, and wrote three novels.[11]