Tom Jones, tuxedoed ladies’ man superstar balladeer of the 1960s, started life as plain old Tommy John Woodward in mining village of Trefforest next to Pontypridd, self-styled capital of the Welsh Valleys. Born in 1940, he was the right age to be amongst the initial generation who discovered rock’n’roll in 1955 when he left school. 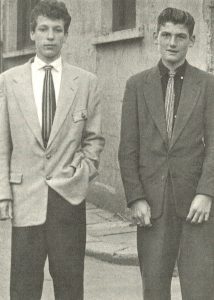 Tommy Woodward and friend about 1957

pp.62–63 “The best thing about the glove-cutting room is the radio. And the best thing on the radio in 1955 is Bill Haley and The Comets doing ‘Rock Around the Clock’. In my opinion. But my older, fellow glove-cutters, particularly the two or three of them who are musicians in dance bands in their spare time don’t agree. … / [I’m] shouting, ‘Wow! This is great.’ But around me people are turning up their noses. Someone says sniffily, ‘It’s just a twelve-bar blues.’ ‘So what if it is?’ I say –although I don’t have a clue what they’re talking about. And who’s counting anyway? / You’re completely wrong,’ I say. ‘That record there is putting everything else to shame. / Because of the sound of it, more than anything else – a noise like you simply haven’t heard. people are disliking Bill Haley because they’re hating the actual sound of what he did. But not me. He’s hitting the nail on the head, right here.”

A workmate, saxophonist in his spare time, invites Tom to see his dance band in nearby Caerphilly:

p.63 “‘You want to come and listen to some proper music.’ So I do, one Saturday night soon after … and then I very quickly wish I hadn’t. Old farts everywhere. foxtrots and waltzes. Boring. Safe. This thing is horrible to me.”

On the following Monday Tom answered his musical critics: “’You’re condemning ‘Rock Around the Clock’ and you;’re playing that crap?’”

“There’s a divide coming, clearly. People only slightly older than me, people in their early twenties, think dance band music is wonderful. … Bill Haley’s on the radio and I’m thinking, right: once rock’n’roll properly kicks in, it’s going to kill all this other stuff. And for a brief, fantastic time it does.”

p.67 Freddy Fey’s record shop, near the town centre’s famous indoor market, was the place to listen to rock’n’roll in the 1950s with its speaker above the door sending the music onto the street on Saturday afternoon. Inside it was a proper music shop with records, sheet music and instruments. Going with the times it stocked the latest records, even having a blues section, and they would thumb through catalogues and advise on the latest records.

Here, in the spring of 1956, Tom first heard ‘Heartbreak Hotel’. “… once again, like ‘Rock Around the Clock’, there’s that slap-you-in-your-face start, and the voice out on its own briefly, so you know who you’re meant to be listening to, who’s meant to be getting your attention.”

p.68 Frustration at not having a record player. “The thing is, though, we can’t hear rock’n’roll on the radio – or not much, and certainly not enough. Band music dominates: Vera Lynn still rules the waves. Her and Vic Damone.”

Two dance halls in Ponty where they played only rock’n’roll “which I think is wonderful because I don’t have to hear any shit.”

pp.68–70 It’s outside Freddie Fey’s that Tom heard something which put Elvis in the shade, a piano rumbling away like a steam train accompanied by a bawling voice – Jerry Lee’s ‘whole lotta shakin’. This along with ‘great balls of fire’ “spark[ed] a passion for Jerry Lee Lewis that’s never going to desert me, no matter what I hear afterwards.”

“God bless Elvis Presley, and nothing against the man, but he seems calculated … a sense of artifice” while JLL has a flow and a feel that doesn’t seem like it’s manufactured, or even rehearsed … / Much later on, when I get to know Elvis, I’ll tell him how I always liked Jerry Lee Lewis. And he’ll say, ‘So do I, Tom. But trust me, he’s crazy. I’ve avoided this man for fifteen years.’ Jerry Lee didn’t give a fuck. He doesn’t now and he never did. And it’s a shame for him, because not giving a fuck destroyed his career.”

02 May 1962, sees JLL with Johnnie Kidd and the Pirates at Cardiff

p.72 “That bloody whistling crow is out there again.”

Tom’s best friend throughout his life was Dai Perry who grew up in the same street in Treforest. Whenever they met up, Tom would give his pal an envelope containing £500 in cash.

Tom’s best friend throughout his life was Dai Perry who grew up in the same street in Treforest. Whenever they met up, Tom would give his pal an envelope containing £500 in cash.

MUSIC I’LL PASS ON Jerry Lee Lewis singing A Whole Lot of Shakin’ Goin’ On. I heard this as a teenager in Pontypridd walking through the town on a Saturday afternoon with my teddy-boy friends. It came on a big speaker outside a record shop and it sounded so different – rock ’n’ roll had just begun. There hadn’t been many songs, especially by white artists. Jerry Lee Lewis came up with this boogie thing that no white man had done before or since.

ca.1953 had a tv in back parlour next to TJ and his bed, as soon as he was declared not contagious, others visited him

On BBC ‘Billy Cotton’s Band Show’ at the time.

(30:00) Alwyn Turner, crepe shoes evolved from desert shoes worn on North African campaign. Started off in South London and messing it about.

“The first time we had an identity and a look that was different from our parents. Fashion changed radically, we went completely the opposite. Not really knowing it. I didn’t think, my father’s jacket is short, I want a long one; my father’s trousers are wide, I’ll wear … I didn’t think that I just didn’t like the way they looked. And I didn’t like short hair cuts, I wanted a Tony Curtis haircut.”

“We had the drainpipe trousers, the suede shoes, YK, with the crepe soles and the long jackets. … The sheriff or the marshall, you know, had a black suit on. If you look at ‘The Gunfight at the OK Corral’ [1957] they had narrow pants with these black suits and long jackets. (I’m thinkin’ more about that than I did, YK … than I have before.). It was groovy, it was cool to look like that.”

“So you’d have the black jeans with the green stitching and a jacket that your father gave you (well I did anyway) and then I got this velvet from the glove factory I was working in and my mother put on this black velvet collar, so there I was a ‘teddy boy’, I looked like YK slicker than slick. YK, I wanted to be a man, desperately. And it wasn’t until I was talking to a tarty-looking girl in a doorway in Pontypridd. And this girl YK had a tight … cos they were wearing in those days, big earrings hanging down, tight sweaters, and she was a swimmer so she was YK a well-built girl. So she was like looking like the girls were looking and there I was looking like the fellas. So I’m chatting her up in a doorway and my mother and sister walk straight past me YK I went “hello mam!” [PSHHWUTT sound]. And then when I got back home she said ‘I’m taking that velvet collar off there because you’ve become a teddy boy.’”

(33:50) [RATC] “Some of the kids said ‘Yeah, it’s allright, you know.’ – ‘It’s allright!’ I couldn’t believe it. It’s tremendous stuff. I mean it hit me like a ton of bricks. I couldn’t believe it. That record right there, ‘rock around the clock’, that was the beginning, then Elvis Presley came, then Jerry Lee Lewis came. They were the three most important records, ‘rock around the clock’, ‘Heartbreak Hotel’, then ‘whole lotta shakin’.”

(35:50) “The trouble was if you wanted to hear RNR or jive with your girlfriend, tehre wasn’t anywhere to do it in Trefforest or Pontypridd in 1955. Dance halls didn’t like teddy boys and girls and they hated our music.”

(36:35) “It was only ten years after the war had ended, YK what I mean, so everybody was relaxing now and they were all going ballroom dancing and having a few drinks on the weekend, every thing was nice, every thing was calm, the Germans were not bombing us anymore, and all of a sudden BA-BAM, ONE-TWO-THREE … It was like, Jesus! … It was like almost as bad to the adults as being under attack, and that’s how powerful rock’n’roll was in 1955.”

– girls chewing gum while they danced

(38:00) “Everybody would be going around in a big circle, YK, the ballroom dancing, a big circle, YK. And you’d think … what if somebody went PSHWUUT! ‘All change!’ YK, I don’t know what would have done going the other way … And then to jive in the corner of these … – I used to go to a Catholic hall, there was a big dance hall in Trefforest – and if you were caught jiving, YK you’d have to sort of go in the corner YK to have a jive. And [they’d have] a 20-minute intermission and they’d play rock’n’roll records, we’d go in there for the 20 minutes and soon as he’d come back on we’d leave. And so that was it, but we were starved for [RnR].”

Tom McGuinness, You couldn’t so exotic on Radio Luxembourg

(39:) “But the sound changed. I think that was another big thing. Because the fellas that I was working with, they were amateur musicians that were playing in dance bands, and they could not play rock’n’roll but they would condemn it. YK, They’d say: ‘Oh, what are you listening to that crap for?’ And I’d say ‘Can you play it?’ YK, ‘Course, we can play it, it’s 12-bar blues’ and I said ‘I don’t know how many bars are in it … but can you do it?’ and I’d go and see them YK, in these dance halls and then on Monday morning ‘Heh-heh, YK you’re not playing it’. But they didn’t seem to get it like we did, the teenagers.”

(44:53) TJ had just married and he started to see Brtish rnrollers such as Billy Fury, Marty Wilde, Cliff Richard

People got worked up, as he sang ‘breathless’ a girl was banging her head against the stage.

People dressed up to go out, especially on a Saturday night (women allowed on Saturday).

TJ reflects on timing/fate “I was 15 when rnr kicked in. Perfect!”

He’s about to burst back onto our screens on the upcoming talent show The Voice as one of the celebrity coaches.

But Sir Tom Jones will also break away from his music career when will star in a new drama this spring.

The legendary Welsh crooner will be seen alongside two of Britian’s biggest talents and beloved actresses Brenda Blethyn and Alison Steadman in a new drama called ‘King of the Teds’ for Sky Arts.

The 71-year-old will play Ron, a former bottle factory worker who was once the top Teddy Boy in his area as a youth.

He and his wife Tina find their lives turned upside down when they are reunited with a friend from their early years.

Sir Tom, who has had a glittering music career spanning 50 years, also had a brief role in Tim Burton’s 1996 movie Mars Attacks.

In that he played himself, caught up in an alien invasion while performing in Las Vegas, and starred alongside Annette Bening in his scenes.

King Of The Teds will be part of a Sky Arts series called Playhouse Presents … which also features one-off dramas with star names.

Harry Shearer, who starred in classic mockumentary This Is Spinal Tap – and is the voice of Mr Burns, Ned Flanders and others in The Simpsons – will play Richard Nixon in one film. Dr Who and Harry Potter star David Tennant will appear in another scripted by novelist Will Self.