I read here, there and a little bit everywhere on the web that the glam rockers like Showaddywaddy influenced the ted style. Some Edwardian Boys in the last few years have put this around too as another reason to shun the brash 70s ted styles.

For any readers who need reminding, the Showaddywaddy look comprised (and out of respect to this forum and to good taste in general I am not uploading any pictures, look for them on the web). Even worse (!) than Showaddyshoddy for debasing the teddy boys’ style – get your head around that – was Mud (excepting their guitarist who dressed like a suburban woman who held cheese-and-wine soirées); see their singer Les Gray doing a Green Cross Code tv commercial in 1976 on YouTube to get an idea:

Pretty awful combination, I’m sure we’ll all agree, and the 70s teds avoided all of these sartorial features with zeal except for number (5), the brash showy colours.

So then did the 70s teds pick this up from Showaddyshoddy and in doing so turn their back on the original 50s teds look?

Well, let’s look at the facts:

Mud had been around since 1968 playing psychedelia but not successfully in chart terms. Picked up in late 1972 by the influential record producer Mickie Most – himself a rock’n’roll singer in the 50s – with his song-writing partners Chinn and Chapman, propelled Mud in a more rocky direction along with debased teddy-boy costumes in October 1973 following which they achieved their first top ten single ‘dynamite’ in November of that year.

So the glam ‘teddy boy’ look, brash colours and all, only came about in mid to late 1973, one year after the highly influential London Rock’n’roll Show held at Wembley Stadium in August 1972.

Who were at that concert with some of the American 50s kings of rock’n’roll? The Teds. Granted, some were plastics just dressing up for the day, but more were the real thing, whether old or first timers. And if you look at some screengrabs from that mega-concert in 1972 you’ll see teds wearing brash colours a full year before Ohsososhoddy and Mud vulgarised and debased the look. 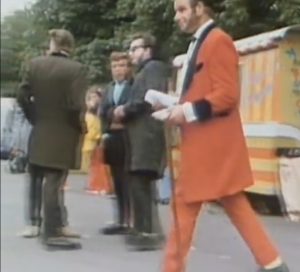 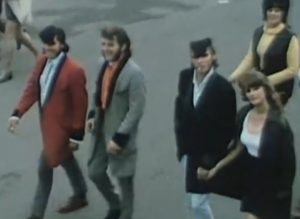 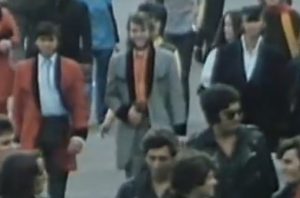 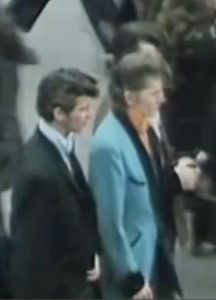 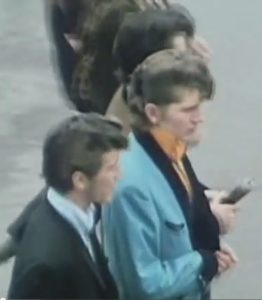 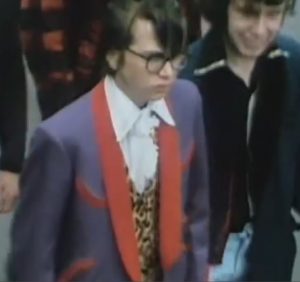 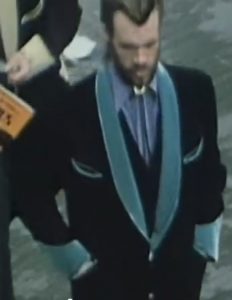 So if teds actually inspired the glam versions but obviously not the original 1950s teds (who I reckon were a little more colourful than the more strict Edwardians nowadays), then which ones or which one inspired the brash colours and when?

A good candidate (although the way these things work out is as soon as a claim is made for a particular person being a pioneer someone will discover an even earlier pioneer), so, I reiterate, a good candidate is a bloke called Harold Harris or, as he was better known, Harold the Ted.

Harold worked as a shop assistant in the fashionable and ground-breaking boutique Mr Freedom which existed between the summer of 1969 and 1972. It was situated on Kings Road, and later in December 1970 moved to Kensington Church Street. I’m sure you’re probably already thinking isn’t that Malcolm McLaren’s boutique Let It Rock? Well these boutiques were at the same premises 430 Kings Road. For just less than a year the address was occupied by a clothes shop named Paradise Garage selling American fashions, in which McLaren first subletted a record and memorabilia stall in the back (October 1971) and acquired the whole shop in November 1971, opening it as the Let It Rock boutique. Let It Rock was frequented by the teds but it soon changed fashion direction and facelifts as it was renamed Too Fast To Live, Too Young To Die (1973–74), then Hiatus, then SEX (Spring 1974–76), then again Seditionaries (Dec 1976–80), and yet again World’s End (1980–).

That entered the mythology of the history of punk, but returning to the beginnings of McLaren’s entry into the clothes-selling business, it is clear that it began as a teddy boy shop. McLaren at the time often dressed as a ted, having been impressed by them as boy in the 1950s, but he had acquired his creepers – in blue – from the preceding shop. It is Mr Freedom which had paved the way for weird clothing. Tommy Roberts, its owner, had bought the premises – originally a hippie boutique – and opened it as Mr Freedom selling brash colourful clothes in newly designed boutique whose main themes were pop art, comic books and camp takes on 50s rock’n’roll and cinema. It became a roaring success visited by models, cinema and pop stars. Mr. Freedom helped push fashion into the 1970s and provided a fashion link between two iconic locations of Swinging London: Carnaby Street and King’s Road.

Harold Harris hailed from Hemel Hempstead, Hertfordshire. Avoiding the articulation of the first letters of his name, hometown and county, ’Arold became the boutique’s star salesman when Mr Freedom moved to Kensington in December 1970. Comments about Harold include:

So it seems, Harold Harris, who wore a brazenly red drape and drainpipes, has a good claim to have been the first garish ted and probably inspired the look which was “bowdlerised by the cheesy likes of Mud and Showaddywaddy.” He definitely inspired Malcolm McLaren directly. The London fashion player Johnny Moke believed so and stated “We all used to go out in the evening, Harold would be there, dressed up and talking about being a Teddy Boy. He was a bit of a handful but we all liked him and Malcolm was always paying attention.”

And it is about time that it was understood that Showaddywaddy and their likes did not influence the ted look in the 1970s, not even for the colours; the only good they may have done us is by putting rock’n’roll songs in the charts at the time which led people onto the more genuine (and better) stuff. And the only remaining question is were there any colourful teds before 1970 when Harold the Ted began working at Mr Freedom and made his presence felt?

Yes, how far back did really colourful drapes go? I’m no colour restitution expert but I sense that this particular London ted filmed in 1968 on the documentary ‘Where have all the teddy boys gone?’ had a red drape with a lighter red velvet collar. Glam rock had not been even imagined at that point.

Happily sporting a brash blue drape at the 2014 Teddy Boy Stomp, a ted of some years made the point about colourful drapes and the prevailing dress styles of the 50s: “If they’d have had colourful cloth in the 50s they would have worn colourful drapes!” In fact, some original teds from the Golden Era did go for ‘outrageous’ colours, I have it first hand from an Aberystwyth ted that he and his mates on more than one occasion back in 1958 actually went all the way to Wolverhampton in the English Midlands in the hope of catching a glimpse of ‘the Tartan Ted’ (I think they must have had other errands such as shopping and dating, but catching a site of the Tartan Ted was always a highlight of their visits). Longtime ted, Tony Papard, also said recently that he did see an original red drape jacket in 1964 at his first rock’n’roll show starring Bill Haley at the Finsbury Park Astoria, later renamed the Rainbow. Unless there was some time-machine business going on, there’s no way these original colourful drape jackets were inspired by Showaddywaddy, so the now completely rhetorical question is ‘Which came first? The colourful ted drapes or the colourful glam rock drapes ?’.

I got nearly all the details about Harold Harris and Mr Freedom from Paul Gorman’s excellent research which you can find on his website, especially his 2013 article ‘The legendary Harold The Ted + one of Mr Freedom’s ‘monstrous oddities’’.

Previous Post: « Speeded-up rock’n’roll recordings of the 50s
Next Post: 1975 ‘A Nous les Petites Anglaises’ and the Ramsgate teds »