The Confederate Rebel look for some teds never became dominant anywhere but seems to have started as something of a fun prank in 1975 when some 250 south London teds – after too much drink, no doubt – resurrected the Confederate States of America under their president Sunglasses Ron and promptly declared war on the USA! 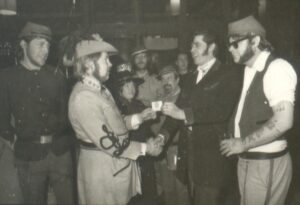 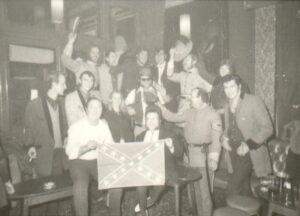 Pt of Confederate States of America 1975

The American rock’n’roller Ray Campi and the Rockabilly Rebels toured Britain for the first time in December 1977 with Rollin’ Rock Roadshow.

In 1979 a band called Matchbox appeared on Top of the Pops to perform their hit Rockabilly Rebel with lead singer Graham Fenton sporting a Confederate civil war uniform.

“It is a fact that Teds and Rockabillies have often worn the Confederate flag without racist intent.”  Keith Crane (rockabilly fan and active trade unionist). www.dreamdeferred.org.uk/2022/01/rockabilly-teddy-boys-racism-antiracism-and-that-bloody-flag/

Previous Post: « 1974 Shakin’ Stevens in Newcastle-upon-Tyne
Next Post: And they went off the rails … 0 – Why these articles? »