The television episode ‘The Rock and Roll Revival’ aka ‘Hype Pressure’ by the Goodies was first broadcast on the 28 of September 1976 and included a parody of the teddy boy/rock’n’roll revival. 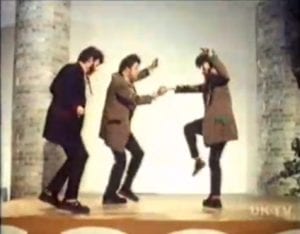 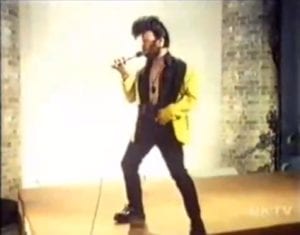 Tim’s nasty tv talent show is a flop after Bill and Graeme’s folk singing is a hit with the judges, so Tim sets about creating the rock ‘n roll revival and becomes a loony TV director

Tim is the presenter and producer of “New Faeces”, a TV talent show. Having run out of awful acts to humiliate, he overhears Bill and Graeme in the Goodies’ office trying to write a new single and ending up trying to perform like folk singers. He invites the pair onto the show, but their dreadful performance actually goes down well with the audience and the judges (including the hard to please Tony Bitch), leaving a furious Tim out of a job.

However, Tim then hits on the idea of the 1950s/rock and roll revival. When Bill points out that that’s already been done, he brings back the rock and roll revival revival and the country is plunged into a ridiculous obsession with everything 1950s, to the point that even the TV has turned into a 1950s version of it. Worse yet, Tim has turned into a sock-selling conman, and the boys have been called for two years in the army as National Service has been reinstated.

The next day, Tim fools Graeme and Bill into thinking that his revivalist stuff has gone stale and invites them to appear on another of his hideous shows, Superficialwith Tim as a flamboyant, white-haired director who begins cue-ing every sort of thing while Bill and Graeme perform as a hippie duo, including the return of World War II.

Yet another of The Goodies’ best episodes! This is in three parts. After a nice intro with Bill trying to compose a hit, follows part one, an “Idol”-style show, “New Faeces”, and just like it is often criticized for in our days, the idea is to humiliate the participants. Although the humor is somewhat straight-forward, and the dead jury member feels a bit desperate, it is still very funny, not least Bill’s and Graeme’s folk song “The world is full of women and men”. Part 2 is “The 50’s revival revival” with a positively fantastic rock’n’roll parody. In part 3, Bill and Graeme sings a “flower power” song while Tim flips out completely as producer, and so does the episode. (See other review for whom they are mocking.)
All but the very ending is first rate. The ending drifts away into such total chaos that there is no logical ending any more, and “cue political broadcast”, is a very brief punchline that seems like an excuse to stop the weirdness. That makes the ending not great but fully acceptable.
Good show! Easily one of the ten best episodes!

This is one of my favourite ‘Goodies’ episodes, mainly because it mocks three popular television shows of the ’70’s – the talent ( free ) contest ‘New Faces’, ‘Stars On Sunday’ ( yuck! ) and the pop show ‘Supersonic’ in which producer Mike Mansfield briefly became a youth cult figure ( his catchphrase was “Cue!” ).
Forget the plot, there isn’t one. Like ‘Goodies Rule O.K.’ it slides from one silly situation to another. It begins with Bill struggling to compose a hit record to follow ‘Funky Gibbon’, much to Graeme’s amusement, and ends with an all-out war between Tim’s Mike Mansfield ( “Cue Hitler! Cue The Luftwaffe! ) and Bill’s Ken Russell. In between there’s a funny send-up of the ’70’s fad for 50’s nostalgia. Kitten Kong and Dougal make welcome cameos, and a treat for older viewers with guest appearances from ’50’s B.B.C. presenters Macdonald Hobley and Mary Malcolm.
Funniest moment – the Goodies dressed as teddy boys, performing a rock and roll number. At one point, Graeme attempts to play a piano using a hammer and chisel! Despite this being the sixth series, ‘The Goodies’ showed no sign of running out of steam.

Here is the section of ‘Hype Pressure’ which covers rock’n’roll where we find Tim Brooke-Taylor’s conversion following a naff rendition of a folk song on his talent programme ‘New Faeces’ by his two colleagues Bill Oddie and Graeme Garden (make sure to start at 6:40, otherwise the Goodies’ hilarious rock’n’roll performance begins at 11:41). Rock’n’roll cognoscenti will recognise garbled version of ‘tutti frutti’ followed by the sax riff from ‘rock around the clock’.