I came upon some of Randy Richter’s YT videos in 2017 and was so immediately struck by his evident knowledge of 1950s rock’n’roll guitaring that I added one of his videos with a little background knowledge to the Lone Lamp. Randy has since gone from strength to strength on YouTube with an ever-increasing catalogue of video clips demonstrating how to play certain well-known riffs of our favourite songs and a monthly series entitled ‘Let’s Talk Rock’n’Roll’ which interviews figures in rock’n’roll fromt he 50s to the present. You should have a look at Lightning Recorders studio the 50s recording studio he is associated with and you can find links to his YT broadcasts at the bottom of this article.

Randy Richter demonstrating and explaining some of the 50s rock’n’roll guitar licks. Too technical for me in parts but fascinating nevertheless.

My name is Randy Richter, I was born in 1974 in Rostock, Germany. At age 16 I started to teach myself how to play the guitar. Shortly after I played shows around my hometown and in 1996 I became a full time professional musician. With my band Randy Rich and The Poor Boys we’ve toured all over Europe and the US and appeared on the biggest festivals in the scene. Due to our excellent skills and our love to the authentic sound of the 1950s I had the chance to play and record with many of the original rockabilly legends like Janis Martin, Glenn Honeycutt, Eddie Bond and Glen Glenn.
In 2005 I started to teach guitar to some local students. Because of the fun I was having doing that I extended this part of my job even further and now I’m also teaching people online via Skype. With my Rockabilly Guitar Video Lessons I have the chance to share my knowledge and my passion for the music of the 1950s to thankful students everywhere in the world.

Luthien Merilin: it’s very interesting what you explain about mixing melodical themes from the song with the bluesy improvising. I’ve often wondered why the blues scale seemed to be so inevitable in later rock-music guitar solos: in rockabilly there’s still the freedom to use other scales, which (imo) is one of the reasons I like it so much. I think it’s even not just themes from the melody of the song at hand that are being tossed in, but all sorts of quotes: maybe other songs, folk tunes – for all I know maybe even fragments of children’s songs. While listening to Cliff Gallup I’ve often wondered where he got some of those lines from: there’s something – I don’t know how to put it – maybe “liberating” comes close, or “joyful”? – to how he does that. Compared to that I often find the run-of-the-mill rock guitar solos strangely limited, even boring, despite that they can be technically brilliant.

Boozoo Chavis: I think it helps if you refer to this as the “original” rock and roll and rockabilly – I was shocked to hear how different Cliff Gallup sounds compared to Brian Setzer and Horton Heat. They are all good but sound much different from each other!! It helps to have a reference in mind, why it is so good to listen to the originals first.

Randy Richter: Very good suggestion, I’ve changed the title. I usually refer to it as 1950s Rockabilly. I had your experience the other way around after hearing, Cliff Gallup, Scotty Moore, Carl Perkins and so on, somebody gave me a cassette with some Stray Cats songs, I was shocked, how anybody could define this as rockabilly. For many songs I didn’t see much of a connection really to the original rockabilly. 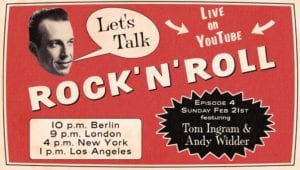