Journalist Daniel Farson broke into television in 1957 when he hosted an interview with Cecil Beaton for AR-TV’s This Week. The company rewarded his charm and quick-witted interview technique by giving him his own series ‘People in Trouble’ (1958) and ‘Out of Step’ (1959), but it is ‘Living for Kicks’ (1960) for which he is probably best remembered.

Farson meets Brighton teenagers, dubbed ‘Sexpresso Kids’ by the Daily Sketch, who have astounded their parents and society by living a hedonistic lifestyle of dancing in coffee bars and engaging in pre-marital sex. After gorgeous period footage of the seaside town (clip, above left), Farson takes an admirably neutral stance, seeming more amused than appalled by the thoughts of beatnik).

“one of the main characters there” Royston Ellis, a poet

3:46– Farson interviews Royston (4:54 “No teenager will marry a virgin”) [other teenagers are dubious]

Farson: Are there such things as teddy boys left?

Royston: Oh, please, spare me that! I have heard of one, he’s uhm … he’s called Seamus and he lives in Ireland. But apart from that there aren’t any in Brighton, unless there old men about 60, camping it up a bit …

Royston: Yes, I think so, well he went out about 5 years ago, didn’t he? That’s one of the troubles, the press regards teenagers as teddy boys, and we’re not you know, and neither are we dissipated yobs corrupted by crime, sex, drinking. We’re just a bunch of kids out for kicks.

Farosn: “Well, just what was the trouble with your parents about your boyfriends?”

June: “Well, mainly because the way he dressed. He wore a tight trousers and a three-quarter length jacket and she didn’t like his hairstyle or sideboards and things like that.”

Farson: “How bad was his hair … hairstyle?”

June: “Well it was the modern style that’s why I like it. I like all boys like that. She likes them to be the old-fashioned country type, you know, very smart and …”

Farson:  “And you thought he looked perfectly allright?”

Farson: “Have you lost him as a result of this? You speak of him in the past tense.”

June: “Oh yes. I’m not going with him anymore, but I didn’t lose him because of that. I went with him a long time after that.”

Farson: “Did he and your parents have a clash, a row?”

‘Ted 1’: If you wear tapered trousers you’re a teddy boy

‘Ted 2’: My mother tells me to cut off my sideboards

ca.24:50 rough elements came about a month after it opened 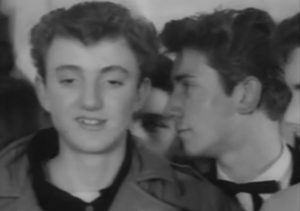 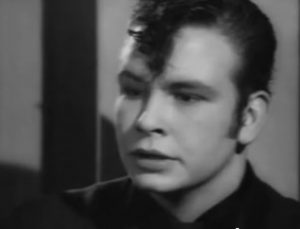 Farson: “Why do you think this place is better than the others?”

‘Ted’ 1 Johnnie Jack ?? “Well, they’ve not got anything against Edwardian suits, you know, you can wear what you like here.”

Ted 2: “You go down the YMCA everybody gives you dirty looks. Because the clothes you’re wearing, see.”

Farson; “But you’re very well dressed, why do you think you get black looks?”

Ted 2: “Well, I think it’s a lot of people are jealous, the grown ups, I think that’s mainly one of the reasons.”

Farson: “Because you’re more smartly dressed than they are?” 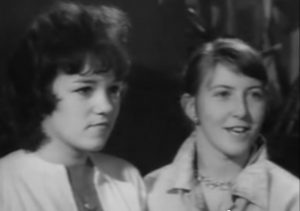 Farson: “Would you rather go with a teddy boy than an ordinary boy?

Girl 1: “Donnow, [tibber] wears a bell-bottom trousers, wouldn’t be seen dead with one.” 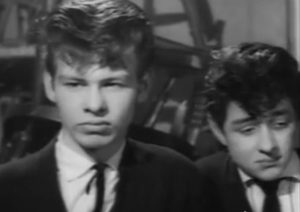 Farson: “Are you all teddy boys?”

Farson: “What do you feel when people say that?”

Farson: “Do you get into fights?”

Farson: “What sort of remarks are made to you? Do you find the same thing happens?”

Farson: “You’d punch their head in?”