A 1974 Granada TV documentary ‘This is Cambridge’ investigating student life happily decided to devote a 3-minute section of the documentary to local teds. Little wonder, the presenter and codirector was Ray Gosling, old-time friend to the teddy boys. To the sounds of ‘tutti frutti’ at a dance hall played by the Bluebirds, Ray gushes a poetic voiceover in his typical style : “But most of you riff-raff like me don’t get to make it at all. No chance to rub shoulders with polar science, or lateral-thinking poly-mathematicians [ … ]. In the college cloisters mega-brains are living in 2007 or else they’ve stopped their clocks with Don Quijote, and here at the Rex ballroom teds have stopped their clocks at 1956.” 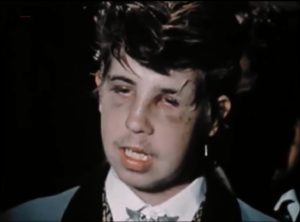 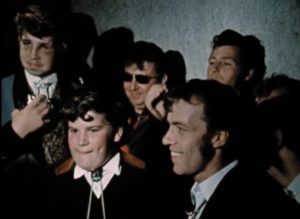 The Rex cinema and ballroom on Magrath Avenue, Cambridge, dating to 1937, in its latter years was a nightclub until it was demolished in 1979. It had seen concerts by Gene Vincent in 1961 (19 July) and by Bo Diddley in 1963 (30 Sep) many years previously. Luckily there are even some pictures of Gene performing at that 1961 concert. 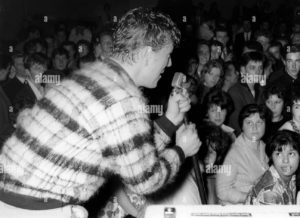 The Bluebirds were a local band that had started in the 1950s and were apparently still going strong in the early 1970s. Judging by this clip, they seem to have been a good band and performed original versions of songs such as ‘at the hop’.